THE SPARKLE OF CHRISTMAS ADVERTISING CAMPAIGNS

The evenings are getting darker, days are getting colder and grand light switch-ons are happening all over the country. Back in the day, wintery signs like these would symbolise the beginning of the Christmas season. Not anymore, due to the phenomenal brand power, the beginning of the nation’s festivities is now triggered by the first play of Coca Cola’s uber popular holiday anthem, ‘Holidays are coming’ on our screens!

This year, the multi billion dollar company is pulling out all the stops for its Christmas advertising campaign. As well as the television ad, which had its first 2011 play on Saturday 12th November, and the annual limited edition Coke Can featuring the world’s most renowned fizzy drink-lover, Santa Claus, the age-old Coke lorry is touring the country! Visiting 100 locations nationwide, the giant truck will be spotted by millions, bringing to life the advert in celebration of the brand’s 80th year of festive advertising. Now that is a campaign to be proud of.

The power of festive TV adverts cannot be denied, Toys R’ Us recently experienced a Facebook backlash after replacing their original ‘Magical Place’ Christmas ad with an ultra modern version with a brand new theme song. The advert, which was first shown in 1989 (the year I was born!) was, for many, a treat they expected on their screens throughout the season. Christmas is a traditional time of year and the great British public love their routines. National brands choose to take full advantage of this, creating advertisements that become a part of the yearly festive routine, M&S and John Lewis never disappoint at getting viewers into the Christmas spirit and the new Littlewoods advert certainly tugs at the heart strings of the impressionable public.

Better go, we have some Christmas Press Releases to be getting on with!

Tonight, BBC1, 8pm, the return of the Great British Bake Off which, let’s face it,... 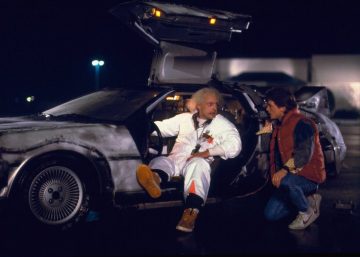 In honour of BTTF Day, we watched Back To The Future II and thought we'd...